Different types of belts are used in a car, depending on the engine size and type. The most common are the serpentine belt also known as drive belt, and timing belt. The drive belt wraps around all of the pulleys in the engine, including the alternator, water pump, and power steering pump.

On the other hand, timing belt is located in the front of the engine and is responsible for synchronizing the rotation of the crankshaft and camshaft.

Timing belts must be replaced periodically to avoid engine damage. In this guide, we shall be comparing between drive belts versus the timing belt.

What is Drive Belt?

A drive belt is a loop of flexible material that connects two or more pulleys. As the pulleys rotate, the belt moves and transfers power from one pulley to the other.

Drive belts are commonly used to transfer power from the engine’s crankshaft to the various components in the vehicle, such as the alternator, water pump, and power steering pump. The tension on the drive belt must be maintained in order for it to function properly.

Drive belts are made from a variety of materials, including rubber, Kevlar, and nylon. When choosing a replacement drive belt, it is important to select one that is compatible with the make and model of your vehicle. 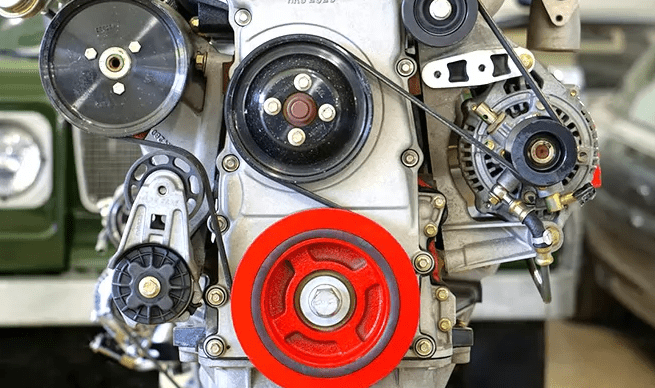 What Is a Timing Belt?

A timing belt, also known as a cambelt, is a vital component of an engine. It’s responsible for synchronizing the rotation of the crankshaft and camshaft, so that the engine’s valves open and close at the correct time.

The timing belt also keeps the pistons moving up and down in sync with the crankshaft.

If the timing belt snaps, it can cause serious damage to the engine. In some cases, it may even lead to complete engine failure.

That’s why it’s important to have a timing belt replacement carried out at the recommended interval. Depending on the make and model of your car, this can be anywhere from 60,000 to 120,000 miles.

If you’re not sure when your car’s next timing belt replacement is due, check your owner’s manual or contact a qualified mechanic.

If the timing belt snaps, it can cause major engine damage. In some engines, a snapped timing belt will result in bent or broken valves.

This can cause serious engine damage that is expensive to repair. That’s why it’s important to replace your timing belt at the recommended interval.

If you’re not sure when your timing belt needs to be replaced, it’s a good idea to err on the side of caution and replace it sooner rather than later.

That way, you can avoid the cost and hassle of having to repair engine damage caused by a snapped timing belt.

A drive belt is responsible for transferring power from the engine to the various components of the car, such as the alternator, water pump, and power steering.

On the other hand, a timing belt is responsible for ensuring that the engine’s valves open and close at the correct times. Failure to have a properly functioning timing belt can result in engine damage.

The different materials allow each type of belt to better withstand the different types of stress that they will be subject to.

If you do not replace your timing belt, it can break and cause serious engine damage. Replacing your timing belt is a relatively simple and inexpensive repair, so it is important to do it on a regular basis.

If you are due for a timing belt replacement, the best thing to do is to take your car to a mechanic and have them do the job for you. However, if you are mechanically inclined, you can replace the timing belt yourself. The most important thing when replacing the timing belt is to make sure that the new one is properly installed and tensioned. If not, it can slip and cause engine damage.

While the timing belt is an important part of your car’s engine, it is not a particularly expensive repair. Depending on the make and model of your car, you can expect to pay between $200 and $600 for a new timing belt.

The average cost for a serpentine belt replacement is between $60 and $200. Labor costs are estimated between $40 and $80 while parts are priced at around $20. This price can vary depending on your vehicle’s make, model, and year as well as the complexity of the job. Always consult with a certified mechanic to get an accurate estimate for your specific car.

A good quality serpentine belt can last up to 100,000 miles. However, if the belt is used in hot or humid conditions, or if it is subject to excessive wear and tear, it may need to be replaced sooner.

Many factors can affect the lifespan of a serpentine belt, including:

– The type of vehicle you drive

– The condition of your engine and other components

– The climate in which you live and drive

If you’re unsure about how long your particular serpentine belt will last, it’s always best to err on the side of caution and check it regularly. Many belts come with a suggested replacement interval, so be sure to follow that schedule. If you notice any signs of wear or damage, have your belt inspected by a qualified mechanic as soon as possible.

How long does a timing belt last? It depends on the make and model of your car, as well as your driving habits. In general, though, you can expect a timing belt to last anywhere from 60,000 to 100,000 miles. If you drive often in stop-and-go traffic or in other demanding conditions, though, you may need to replace your timing belt more frequently. Be sure to consult your owner’s manual for specific recommendations.

Signs of a Bad Serpentine Belt

If you notice any of these signs, it’s important to have the serpentine belt inspected and replaced if necessary. Don’t wait until the belt fails completely, as this can cause serious engine damage.

Signs of a Bad Timing Belt

A timing belt is a crucial part of your vehicle’s engine, and when it starts to fail, it can cause some serious problems. Here are some signs that your timing belt may be going bad:

– Your engine is making strange noises. If you notice any unusual sounds coming from your engine, it could be a sign that the timing belt is starting to wear out.

– You’re having trouble starting your engine. If it’s becoming increasingly difficult to start your car, it could be a sign that the timing belt is slipping.

If you notice any of these signs, it’s important to have your timing belt checked by a professional as soon as possible. Ignoring the problem could result in serious engine damage.

Whether drive belts or timing belt, they both play an important part on your car engine. Like any other car part, these belts are subject to wear and tear and they need replacement as soon as possible to prevent potential damage to your engine.

If you didn’t know how each belt functions, it’s my hope that you are now aware of how they function and how you regularly need to replace them.