So, does Cataclean work?

Yes, it works. Overall, 79% of ratings indicate that Cataclean works. It is typically used on older cars or motors that have trouble passing emissions tests. However, the only circumstances they do not function is when the user fails to follow the directions given on the product or when the catalytic converter is damaged beyond repair.

Yes! A cataclean works by removing carbon deposits from your catalytic converter . Thus when you use it regularly, it will aid in the removal of persistent deposits and the prevention of fresh carbon buildup.

In most cases, a Cataclean should be used on older cars or motors that have trouble passing emissions rules and regulations for automobiles. 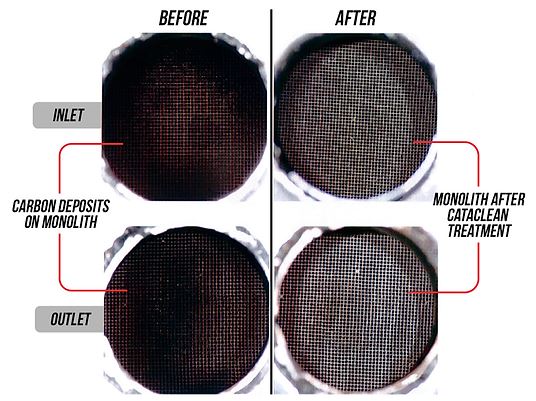 The only time Cataclean may fail to work is if the catalytic converter is damaged beyond repair. It could also fail if the user failed to read the instructions carefully.

However, you will find a lot of speculation and controversy around fuel additives because their results are not something you can see or evaluate truly.

While the fuel economy is expected to improve, there’s no specific way of proving if the oil is cleaned or if the Cataclean has helped in any other way.

Nevertheless, if the fuel economy improves, it is clear that less gasoline is being utilized, implying that some change has occurred.

Therefore, fuel economy will undoubtedly improve on subsequent journeys after applying the Cataclean. As a result, Cataclean will assist the catalytic converter’s performance rather than prevent its functioning.

However, it would be best to note that a Cataclean will not work magic; if your catalytic converter is extremely damaged or the exhaust is leaking, it will not help.

In this regard, cleaners may reduce carbon deposits in a completely operating catalytic converter, but they won’t be able to resurrect one that has been damaged or exceeded lifespan more than 100,000 miles.

So, a Cataclean is very effective but will not work in extreme cases.

How Does Catalytic Converter Cleaner Work?

A Cataclean helps to remove carbon buildup from your catalytic converter.

It contains solvents that break down the deposits that are formed through polymerization and oxidation of hydrocarbons in your car fuel delivery system.

This product contains acetone which has been scientifically proven to enhance the efficiency of fuel combustion.

At the same time, when you use it regularly, it will aid in the removal of difficult deposits and the prevention of new carbon buildup.

Are you wondering if using is Cataclean harmful to your engine in any way?

A Cataclean is not dangerous, and it is safe. You can use it in gasoline and diesel engines, eliminating the need to purchase different products. You can thus use one bottle to serve both functions. To keep your fuel system in good functioning order, you can use a Cataclean three to four times a year.

A bottle of Cataclean will cost you back between £12 and £16, depending on where you buy it. It may appear costly, but you will only need to purchase it once a year.

Also, it is a good idea to clean the carbon out of oxygen sensors and EGR valves and dissolve glue and gum in the fuel lines and catalytic converter. At the same time, it will aid in the prevention of future accumulation.

How Long Does It Take for Cataclean To Work?

After pouring the cleaning chemical into the gas tank, it will take around 30 minutes of driving for the cleaner to circulate to every necessary component of the vehicle to operate.

So, you fill your gas tank with the entire contents of the bottle. It is essentially filled in the same place where you would put gas. After you have finished, drive your automobile for at least 15 minutes to allow the Cataclean to permeate into the car’s components.

Then, check for and eliminate any error codes shown on the onboard computer after your vehicle’s first drive.

Is Cataclean also safe to use? Yes, a Cataclean is safe for gasoline and diesel engines, so there’s no need to buy separate formulations. Both can be done with just one bottle.

Cataclean recommends using it in 15 liters of petrol or 1/4 of a tank; therefore, you should have to let the tank fall a little more before using it.

Final Thoughts on Does Cataclean Work?

After pouring the cleaning chemical into the gas tank, it takes around 30 minutes for the cleaner to circulate to every important vehicle component and fulfill its function.

So, does Cataclean work?

Yes, as explained in detail in this article, a Cataclean works, according to positive Amazon reviews. There is only negative feedback when the catalytic converter is broken or in extreme circumstances. It could also fail if the user failed to read the instructions carefully.

Therefore, read carefully the instruction given before using the Cataclean. Also, if your catalytic converter is extremely damaged, ensure you replace it because a cleaner will not help.