In this guide, I’m going to show you ways on how to ruin an engine without evidence. Well it’s a fact that your car gas tank is intended for gasoline, and adding anything else can ruin your car.

Adding foreign substances such as sugar, bleach, salt, coke, etc., will clog the filters or, worse, destroy the engine in the long run.

What to Put in Gas Tank to Ruin Engine

Every car owner knows that the gas tank requires only one chemical: gasoline.

Besides gasoline, sugar, salt, honey, water, or any other chemical can cause clogging of the fuel filter or even worse leak into the engine resulting to long term engine damages.

These are just a few examples of the substances you can add to your gas tank and destroy an engine without leaving a trace.

The following are examples of everyday things we use in our homes can be used to destroy an engine without leaving immediate evidence.

How to Ruin Your Engine without Evidence

Even though there’s been significant advancement in the automobile industry there are tons of ways a person can ruin your car engine discreetly.

Destroying an engine through the gas tank does not require any specialized skills.

If you own a vehicle, it is important to know what can ruin your engine so that no one puts anything in your gas tank.

1. Water in the Gas Tank

If water is added to your engine, it will cause compression problems considering how engines operate. Water will cause the bending of piston rods that will eventually break. 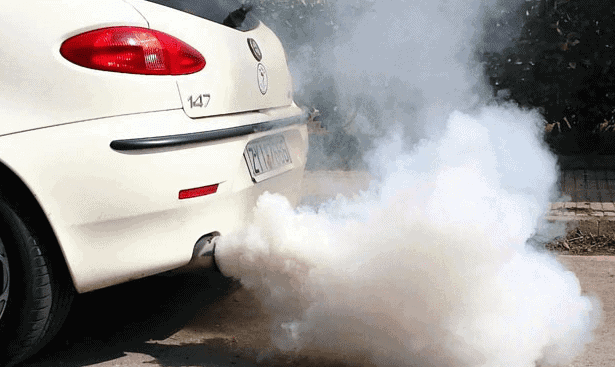 When the piston rods break, they can carry a significant chunk of your engine on its way out. The piston rods can destroy the bottom, as well as the top of the engine.

Besides the piston breaking, water is a known agent for causing rusting. Rusting occurs more when you do not use your car for prolonged periods.

Note that even one cup full of water can ruin your trip. Small amounts of water added to your gas tank can severely affect your engine.

Signs of Presence of Water in Gas Tank

White Smoke: Water does not only affect the pistons. It also gets into the combustion chamber or your car’s exhaust system.

Considering the natural characteristics of water, it will evaporate, thereby causing steaming.

This effect will present itself as a considerable amount of white smoke that comes out of your tailpipe.

You should note the difference between the white smoke caused by water and the slight smoke that happens when you start your car on a cold morning.

White smoke that occurs because of water should be noticeable.

Car is Unable to Start: water can rise to the top of the piston, thus, preventing you from cranking the motors, and starting the vehicle.

Decreased Fuel Efficiency: As a car owner, you know how much fuel your vehicle consumes in a day. You may notice some changes in the frequency of refilling your gas tank.

The increased consumption of fuel is because water can dilute gases, that when exposed to heat, causes evaporation, and reduces the amount of fuel in the gas tank.

Idling and Starting Problems: When you notice that your car is sputtering fuel when idle and other characteristics such as stalling out and surging are indicators of contaminated fuel.

Also, when you start your car, and it dies down after a while, it may indicate that your fuel has been contaminated with water. 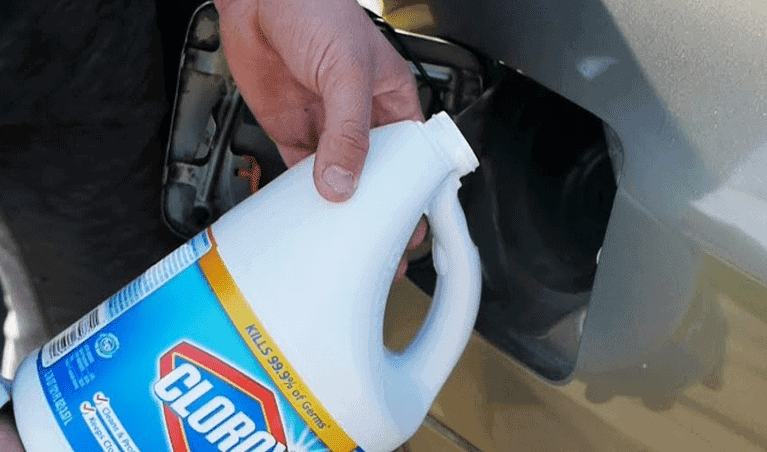 What changes occur to your car if you add bleach to your engine?

The parts of the engine that the bleach touches can rust and ultimately wither away if it stays in the engine for prolonged periods.

Bleach causes decaying of rubber and metallic parts of the engine, thus, decreasing efficiency of the engine.

The vulnerable parts of the car drive system affected by bleach are the evaporation control system, the fuel pump, and the injector.

The first noticeable change in your engine is that it will struggle to stay running, or it will be running but poorly.

The exact changes will depend on the amount of bleach added to your fuel tank and the amount of gas present when the bleach was added.

If your gas tank were almost full, the mixture of bleach and fuel would be more dilute, meaning that you would be better off than if your tank was empty.

It will take a considerable amount of bleach to diminish a perfectly functional engine, and the most noticeable effect is sluggish performance.

Even though the changes do not occur immediately, it does not imply that it is not happening already; therefore, you should take note.

How can brake fluid damage your engine? The effect is not as critical as the other chemicals because the worst effect that brake fluid can have is cleaning your vehicle’s petrol injectors.

Brake fluid becomes dangerous when D0T 5 fluid is added because it is silicone-based, and may mess up your oxygen sensor.

You can get away with this by consistently filling your gas tank with fuel to dilute the brake fluid.

4. Salt in the Gasoline Tank

Salt does not target the gasoline in the gas tank but the water because it will dissolve. As this happens, it causes corrosion at the bottom of the tank.

Even though there are minimal chances of it seeping into the engine, it is worth mentioning that salt crystals may get into the fuel pump and cause clogging of the filter, thus, making the engine stop.

The good news is that salt is unable to dissolve in gasoline.

Unfortunately, anything that gets in the tank stays there. The coarse nature of salt can cause scratches on the engine cylinder walls as well as the piston rings.

If sugar is poured into the gas tank, it does not dissolve in gasoline and gets sucked into the fuel lines, eventually causing clogging of the critical parts of your fuel system.

It is worth noting that pouring sugar into someone’s gas tank is considered a crime and a serious one if it endangers the life of the car owner or driver.

Some cars have effective fuel filters that prevent sugar from reaching the engine.

When sugar gets into the engine fuel system, it clogs the pumps, injectors, and engine itself.

Sugar causes build-ups that harden and require the owner to get a new engine.

Some of the signs of sugar in the gasoline tank include:

Usually, when water/urine hits the gas filter, it plugs it up, which shuts down the engine. If urine makes it through the filter, it will make the engine run roughly.

Urine is saltwater, and it will make your engine rust rapidly. Since urine is denser than gasoline, it will move to the bottom of the engine tank, thus, causing rusting.

The polar nature of hydrogen peroxide will make it sink to the bottom of the tank. Given that petrol is a non-polar substance, the mixture will release a lot of oxygen.

The engine cannot start when this happens.

The main long-term effect of hydrogen peroxide on the engine is that it leads to the release of lots of explosive oxygen when ignited.

It would be best never to use hydrogen peroxide because, besides the dangers of explosion, it has water that further leads to corrosion. 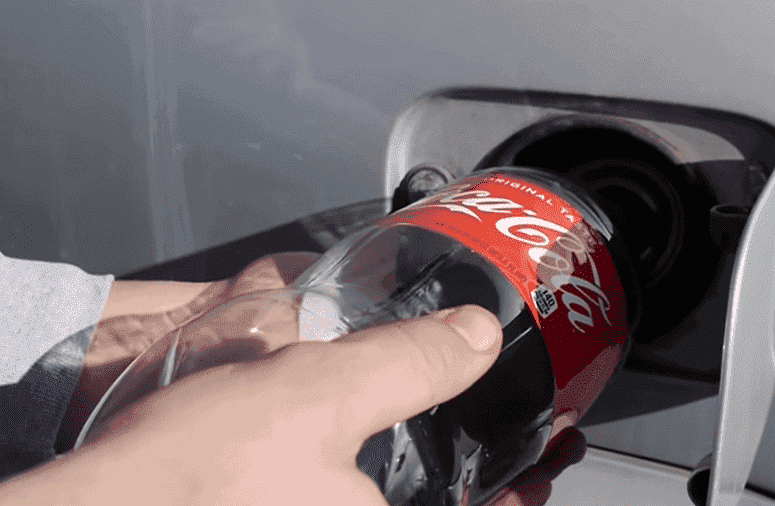 Small amounts of soft drinks on the engine do not have significant effects. It may lead to strange sounds when the engine runs, such as ‘hiccoughs’.

However, when large amounts of soft drink are added, your engine cannot process it. The drinks are mostly water; they might seep into the fuel pump and line.

The engine will not work because water cannot power it up.

The effect of sugar will also be felt because it will melt on the filters while the engine runs. This may require you to replace the filters.

Seek help from a mechanic- ask them to drain excess water from your engine. The mechanic should also change the filter system immediately when you mention a beverage in the fuel system.

If you possess information on how engines work, you can detach the fuel line and drain the engine yourself.

However, it would be best to consider the dangers of doing it yourself because gasoline is highly flammable.

Engines have many parts that are in constant motion when a car is running, and they operate at high speeds and temperatures. All these parts require lubrication for smooth running.

Oil is added to the engine through a cap labelled oil to the crankcase located under the hood. The oil settles on the oil pan when the engine rest.

When you start the vehicle, the oil moves through the engine parts and passes through an oil filter that eliminates any contaminants that may cause damage.

When you add too much oil, the level rises in the oil pan, and causes the crankshaft (a fast-moving lobed rod) to touch the oil, causing aeration.

This movement causes the formation of a frothy substance that cannot lubricate the engine effectively.

Worst Thing to Put in a Gas Tank

Judging from the points discussed above, bleach is the worst thing to put in a gas tank. Bleach comprises of chlorine and water.

Chlorine’s physical nature makes it denser than water so that it will sink to the bottom of the tank.

Chlorine gas, on the other hand, reacts with the fuel, leading to corrosion in the engine parts in contact with the gas.

When fuel reacts with bleach, it becomes inert and diminishes the vehicle’s performance. The effects are severe when large amounts of bleach are added to the tank.