I was driving my pops to the drug store the other day. We were enjoying the moment with some relaxing music and good conversation when sadly, we got a flat tire.

I am not the best at doing handy work, so I call my mechanic, and the first thing he asks is whether my car has a Chevy 6 lug pattern.

I knew what he meant, but my old man raised his brows in question because she did not know much about cars.

After the car was fixed, my pops emphasized the whole concept for the rest of our trip. It was not the kind of conversation I was hoping for, but it was worth it.

A lug or a bolt pattern is the measurement of the invisible circle formed by the lug holes found at the center of your wheel.

Chevy 6 lug pattern is one of the most common 6-lug patterns in the automobile industry. Millions of cars use it throughout the world, and your car might be one of them.

The most common pattern is a six-lug, 5.5-inch medium or standard offset.

What is a Lug/Bolt Pattern?

A bolt pattern, sometimes called the bolt circle, comprises three or more holes that surround the huge hub bore at the center of the wheel. 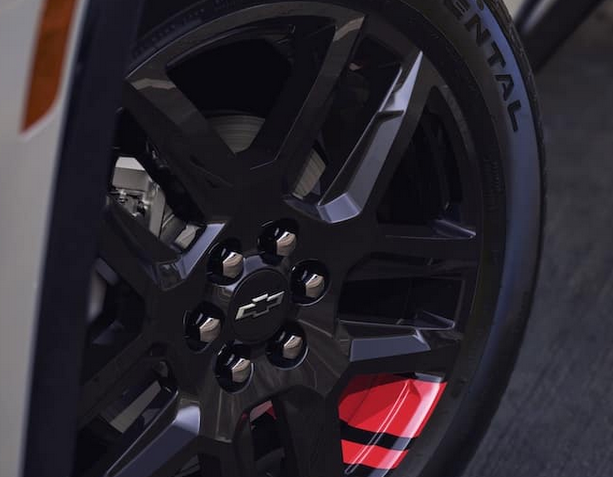 Therefore, it is the pattern used to install a wheel or rim on your vehicle.

You can make the bolt pattern visible if you draw imaginary lines that cut through the center of each circle.

A lug nut or a lug is used to fasten the wheel hub to its axle. They hold the wheel in place and center it to the axle.

They are the sections of the wheel that hold the lug bolt or lug nut to hold the wheel firmly on your vehicle.

Even though the lug holes are small, they play a crucial role in fastening the wheel firmly to your vehicle.

The lug holes are arranged to form the bolt pattern, determining the wheel that fits your vehicle.

Note that your bolt pattern is specific to your vehicle. This means that your car can only accept a wheel with the same pattern as the original equipment wheel.

Also, the number of lugs on your vehicle depends on its size, whereby larger vehicles have more lugs than smaller ones.

Lug hole seats are created in a way that matches a specific lug nut or bolt type. There are several lug seats, each fitting a particular type of bolt or lug nut.

Mag, shank, and torque retention have a flat and washer-like seat that matches the flat lug seat in the wheel.

When using these three lugs (torque-retention, shank, or mag), ensure that the shank is of the right length to suit your needs.

Note that using lug nuts that do not match the lug hole seat damages the lug hole, resulting in improperly fitted wheels that may detach from the vehicle.

Make sure you use the correct lug nut or bolt.

You should also ensure that the lug and axle patterns match to prevent your wheels from vibrating due to incorrect placement.

What is Chevy 6 Lug Bolt Pattern?

Chevy is known to use a 6-lug bolt pattern in most of its vehicles. If you are using its SUVs or trucks, the bolt pattern of your car is most likely a 6-lug, 5.5-inch medium, or standard offset.

How do you measure the 6-lug bolt pattern? This measurement is determined in a straight line, starting from the central point of the two bolt holes placed directly opposite each other.

The bolt pattern is a notable factor of consideration when purchasing new wheels.

The bolt patterns of cars differ depending on the number of bolts they can hold.

This bolt circle uses four lugs. This pattern is easier to determine compared to the rest because it is measured by drawing a straight line across the centers of two bolt holes sitting directly opposite each other.

This pattern is more challenging to determine because it carries bolt holes in an odd number. They have no distinct holes sitting across each other, meaning that you have to estimate this measurement.

A recommended method of determining this measurement is using a straight line from the back of one bolt hole to the center of the third hole.

However, you can determine the accurate measurement by using a tool known as a bolt pattern gauge.

You can calculate the measure using a geometric equation if you have the knowledge and training.

This is the ideal size of the Chevy bolt pattern. Its measurement is similar to the four-bolt pattern as you can measure the straight line from the centers of bolt holes placed directly across from each other.

This pattern is most common in luxury vehicles, full-size SUVs, and midsize vehicles. The measurement of this pattern is similar to the others, with bolt holes in even numbers.

It is one of the most common bolt patterns.

How to Measure Bolt Pattern

A bolt pattern is determined by carrying out two specific measurements (Conducted using a two-number system).

The first value represents the number of bolt holes in the wheel, while the second indicates the diameter of the imaginary circle formed by the holes.

For instance, a bolt pattern presented as 5-100mm means that the wheel has five bolts, and the diameter of the imaginary circle is 100mm. The diameter is measured across the center of the wheel.

Logically, larger vehicles have larger bolt circles compared to smaller vehicles. The illustrations below depict the most accurate ways to measure bolt patterns.

A four-bolt pattern is determined by measuring the straight line touching the centers of two bolt holes seated directly across.

As discussed earlier, five-bolt patterns are more challenging to determine because the bolt holes do not sit across from each other.

You can estimate this value by measuring a straight line from the backside of one bolt-hole to the center of the third one.

You can use a bolt pattern gauge or calculate it using a complex geometric equation to make an accurate measurement.

A six-bolt pattern is measured using a straight line touching the centers of bolt holes sitting directly across from each other.

8-bolt patterns are measured the same as the other patterns with bolt holes in even numbers. Measure the straight line from center to center of holes directly opposite each other.

How Do You Measure a 6-Lug Pattern?

You can obtain the first value by measuring the line across the centers of two bolt holes. The second measurement is from one lug hole to the one diagonal from it.

The measurement is recorded in inches and millimeters.

When combined, the measurements for a 6-lug pattern determine whether the wheels will fit your vehicle, whichever type it is.

If you want to learn how to conduct these measurements, you can do it at home and then compare the values with the ones listed on websites of tires and vehicles.

Other Factors to Consider Beside Lug Pattern

As much as the bolt pattern and log bolts play a crucial role when purchasing a wheel, other factors need to be considered.

Zero indicates that no distance exists between the centerline and the surface of the hub mounting.

Positive offset refers to the case where the centerline is behind the surface of the mounting hub.

A negative offset means that the centerline is in front of the surface of the hub mounting, and is the surface is more toward the vehicle.

Wheel manufacturers produce wheels in bulk, so they do not have wheels for any specific car type.

Different car manufacturers make vehicles with varying axle sizes, and they need to use hub rings to ensure that the wheel fits properly.

However, you have to address the ride height using a leveling or lift kit to fit and prevent wheel rubbing.

They are not, and you have to get one with the same lug pattern, measurement and center bore for it to fit.

Lug patterns are crucial to consider before purchasing or changing a wheel for your vehicle. There are several lug patterns, and they differ for cars depending on factors such as the size of your vehicle.

The Chevy 6 lug pattern is typical for various trucks and SUVs, meaning that their wheels have 6 bolt holes, from which the pattern measurement is derived.

You should know your vehicle’s bolt pattern to ensure that the wheels you purchase fit perfectly to avoid vibrations on the wheel.

I am sure that your mechanic is informed of your wheel requirements, but it is also essential to learn about it if you have to do it someday.